Birthday Gifts For Her Anniversary Gifts For Her 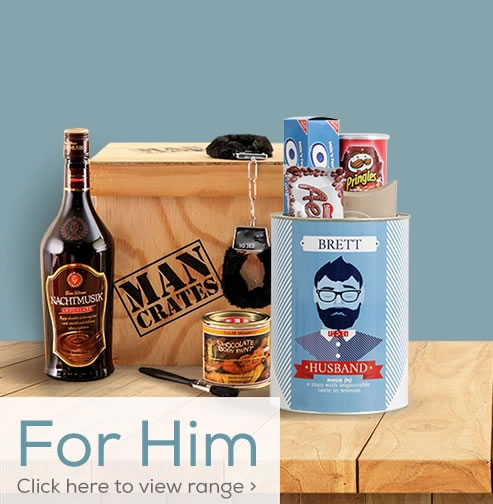 Anniversary Gifts For Him Online gifts from Hamperlicious would be the quick approach to send a distinctive gift anywhere in Bloemfontein. All that you should do to send a gift basket for any place in Bloemfontein is check out our spread of gift items online, pick and click, then pay making use of our secure payment service. Our proficient staff will make the gift basket of your liking regardless of whether you would like candies, wine, or sparkling wine or perhaps even a personalised gift? Our company’s gift delivery service will deliver the same day if ordered before 11am or the following working day. This wonderful gifts online service is readily available straight from your house, 24 hours a day, whenever you wish to deliver a special person a amazing gift.

Organising a gift delivery in Bloemfontein couldn’t be more simple with Hamperlicous.co.za. Our expert gift basket delivery service in Bloemfontein yields and sends your gift hampers for just about any home address, 7 days a week.

Our company take additional care when mailing presents and our expertise and experience implies once your present arrives the receiver will be amazed from the presentation. To get a same day gift delivery all you should do is decide on your preferred hamper from the online collection, insert your details and buy. Should it be for an baby shower, for a birthday celebration or just because! We are going to deliver instantly to the door anytime.

Flowers Delivered By Our Florist Bloemfontein

Flowers have got a original expression – we all believe that any red roses means lasting love, but did you know an orchid symbolises enhanced elegance? Our florists in Bloemfontein appreciate this language, and converse it well! Their capacity in designing charming flower bouquets can take your message and turn it to produce a flowery joy for somebody unique. At Hamperlicious, our florists online may well cover a same day flower delivery to any address in Bloemfontein, making sure your blossoms arrive in top condition every time. And you will achieve this all from the comfort of your home with our expansive selection of online flower arrangements.

Fantastic bouquets are the ultimate method to celebrate a distinctive day. Whether it’s a wedding ceremony, Valentine’s Day, a bday, a special house warming or even just a unexpected ‘what the heck, it’s Wednesday!’ blowout, all of our competent florists in Bloemfontein may perk up anyone’s day. At Hamperlicious, our range of amazing flower arrangements online renders it really easy to simply choose and then click the perfect arrangement, and all straight from your own property. Why opt trying to find a florist when you’ve got one at this website on your computer? Plainly take a look at our collection and help our florists in Bloemfontein take it from there for you. Bloemfontein is the capital of the South African Free State province and the country’s sixth largest city. It has also been South Africa’s judicial capital since 1910 (one of the country’s three capitals). Bloemfontein is known informally as the Rosestead and is called in South Sotho Mangaung. The city covers an area of ​​236 square kilometers and, according to the 2011 census, has a population of 256 185.

Bloemfontein is situated in the heart of the Free State’s central plateau and is one of the few cities with a park in its center, on top of Naval Hill. The name of the city refers to a fountain with flowers – originally a watercourse of the Bushmen. Bloemfontein is still known for its flower splendor and bears the proud nickname “Rosestad”.

The city originated in a British fort and settlement established in 1846 by Major Henry Douglas Warden in the then Transorangian region. It then served as the administrative seat of the British colony of Orange River sovereignty (1848–1854) and the independent Boer republic of the Orange Free State, founded in 1854.

Between May and June 1899, the historic Bloemfontein conference was held here as a last-minute attempt to avoid a military conflict between the then Boer republics and the British Empire .

In the 20th century, Bloemfontein developed into the geographical hub of South Africa’s rail network. About 160 km northeast of Bloemfontein, a major economic upturn began in 1948 with the exploitation of the Free State Goldfield . Later, from 1962, the area was central to the realization of the Orange River project with its hydroelectric power stations and irrigation schemes.

Today, Bloemfontein is a modern city with skyscrapers, shopping centers and restaurants ; and the Sand du Plessis theater as one of its most distinctive architectural attractions. At the same time, Bloemfontein has preserved its cultural heritage, and the city boasts beautiful historic buildings such as the Council Hall, one of the most beautiful in South Africa.